FlexAir: At the cutting edge of broadband communications for aircraft

Uninterrupted connectivity has long been a requirement for government aviation, and for today’s military and other non-commercial government aircraft, demand for faster broadband communications at high data rates has never been greater.

With Intelsat General’s FlexAir solution, users gain access to a global Ku-band satellite network that’s built on the latest anti-jam, HTS (high-throughput satellite) technology and designed specifically for aircraft with high-performance requirements. It delivers the first commercial Ku-band network that’s maximised for the 45cm-equivalent antenna used on government aircraft and is equipped to deliver up to ten times the data throughput of other networks.

Robert McCord, Senior Manager for Market Development at Intelsat General, envisioned FlexAir as a “bring-your-own-antenna” solution that will work with different antennas of various styles, sizes and capabilities. This feature hasn’t previously been available to users of other commercial managed satellite networks, he says, and can have particular advantages for governments, which tend to operate fleets of different aircraft with a range of antenna requirements. “Governments don’t like it when you tell them what kind of antenna their aircraft has to have, so we’ve qualified a number of diverse antennas including 12” T-Tail form factor and 60cm performance equivalent flat panels,” adds McCord.

Another advantage to FlexAir, says McCord, is that the Ku-band satellite network is “open architecture”. Whereas Ka-band network users may be limited to using three or four satellites simultaneously (and the equipment they come with), with FlexAir users can complement Intelsat’s fifty plus satellites reaching out to over a thousand other Ku-band transponders on third-party satellites (including other high throughput satellites) as their network grows.

FlexAir offers two services starting with Global Access, Intelsat General’s base solution with global capability – meaning an aircraft can pull out of a hangar anywhere in the world and access the network.

The company’s intelligence surveillance and reconnaissance (ISR) service – used by aircraft that regularly need to send sensor data to command centres is a complement to Global Access– gives these aircraft access to the higher data rates they need to transmit videos and other sensory data, like airborne early warning and control (AEW&C) radar data, that are of high enough quality to ensure mission success.

“With our ISR service, you have your choice of beams based on the user’s geographic requirement, and you pay a fee for that beam only, making this option highly efficient and economical.”

It’s this pay-as-you-go pricing model that also sets FlexAir apart from other government aircraft solutions, says McCord. Whereas traditional networks typically require a two-year commitment, with FlexAir’s pay-as-you-go service offering, users pay only when they use the service, while also enabling payment based only on the quality of service the network is able deliver at that particular time.

“Customers don’t want a two-year contract when they only fly for a few months a year,” says McCord. “With pay-as-you-go, they can get on the network right away without having paid activation or monthly fees. We also believe that five years from now, aircraft will not only be multi-band, they’ll be multi-network within band as well. Why would you lock yourself into a closed network with just one solution?”

FlexAir marks a leap forward in terms of the quality and reliability of broadband communications for government aircraft, McCord notes.

Characterising this new approach, McCord says that in the past, “it was assumed that aircraft needed one data rate all over the globe, or at least throughout a certain region. But we realised that a data rate is always focused on a particular, identifiable geographical area. Setting up the infrastructure for one beam, or one data rate worldwide, or across one entire region, which probably won’t get used, is a waste of resource. That’s what’s important here – the dedicated bandwidth based on explicit user requirements.” 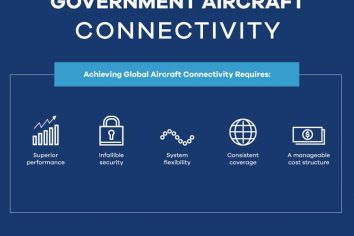 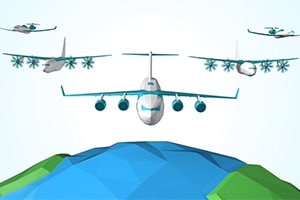 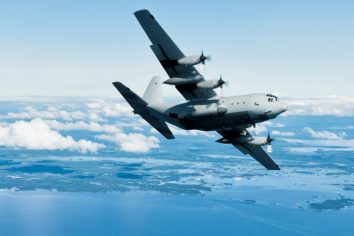