London and Luxembourg, 29 August 2019 – Intelsat S.A. (NYSE: I) (“Intelsat”), operator of the world’s first Globalized Network and leader in integrated satellite communications, and Africa Mobile Networks (AMN), an integrator of mobile network infrastructure, today announced that a milestone in bringing mobile connectivity to unserved communities in sub-Saharan Africa has been reached. Building upon a partnership announced in the fall of 2018, in less than a year, approximately 525 remote cell sites have been connected, with the goal of expanding mobile coverage to other parts of the region by the end of 2019.

“As both a global corporation and a global citizen, Intelsat is committed to investing in accelerating the adoption of mobile connectivity in sub-Saharan Africa — and throughout the world — and closing the digital divide,” said Jean-Philippe Gillet, Intelsat vice president and general manager, networks. “Through this partnership, we are now providing access to mobile coverage for the first time to approximately 1.7 million people living in remote communities across several countries that many thought were impossible to connect.”

Until now, the cost of expansion and geographic complexities in remote rural areas of Africa have made establishing connectivity for the communities, individuals, and businesses in these regions extremely difficult. AMN has developed a low-cost solution, powered by a highly reliable small cell solar-based system that can be rapidly deployed in less than six hours. Combined with the power, performance and efficiency delivered by the three high-throughput Intelsat EpicNG satellites, as well as the 23 additional satellites covering the African continent, AMN and Intelsat are delivering a mobile network infrastructure that is fast, cost-effective, reliable and able to easily scale to meet emerging data demands.

“Intelsat shares our vision of installing a cell site in every African village,” said Michael Darcy, AMN chief executive officer. “Like us, they recognize that when you close the connectivity gap in sub-Saharan Africa, you can bring about significant positive change in people’s lives. Using Intelsat’s technology, our two companies can make that vision a reality.”

About Intelsat
Intelsat S.A. (NYSE: I) operates the world’s first Globalized Network, delivering high-quality, cost-effective video and broadband services anywhere in the world. Intelsat’s Globalized Network combines the world’s largest satellite backbone with terrestrial infrastructure, managed services and an open, interoperable architecture to enable customers to drive revenue and reach through a new generation of network services. Thousands of organizations serving billions of people worldwide rely on Intelsat to provide ubiquitous broadband connectivity, multi-format video broadcasting, secure satellite communications and seamless mobility services. The end result is an entirely new world, one that allows us to envision the impossible, connect without boundaries and transform the ways in which we live. For more information, visit Intelsat.com or follow us on LinkedIn, Twitter, and Facebook.

About  Africa Mobile Networks
The mission of Africa Mobile Networks (AMN) is to build mobile network base stations serving rural communities in sub-Saharan Africa that have no existing service, providing mobile network operators with a capex-free route to add new subscribers and new revenues and with incremental costs. AMN’s vision is a fully connected Africa, with no community of any significant size being without basic telecommunications services to deliver social, economic, educational and other benefits to the population. For more information, visit Africa Mobile Networks or contact info@africamobilenetworks.com. Follow AMN on LinkedIn, Twitter, and Facebook. 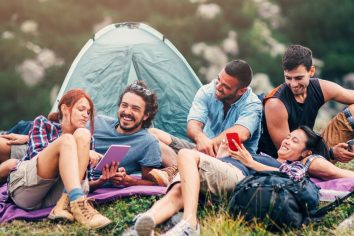