Why Ku-band HTS is Superior for AISR 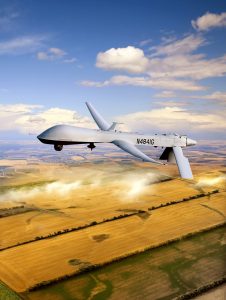 The commercial space industry is experiencing a new era in satellite performance. Over the past few years, multiple commercial satellite operators have deployed and activated next-generation high-throughput satellite (HTS) constellations. These satellites are able to provide far more throughput than existing wideband satellites, with increases in throughput of up to 400 percent.

These new HTS have re-energized an enduring debate regarding which satellite frequency – Ku-band or Ka-band – provides the best customer service. In the area of airborne ISR (AISR), however, there should be no debate. Ku-band is superior for those applications, for a number of reasons, including but not limited to: time to service, cost, and technical and operational limitations.

First, Ku-band is the incumbent frequency for the majority of deployed AISR assets. In fact, the larger UAVs such as the Predator, Gray Eagle and Global Hawk are virtually 100 percent Ku-band across the DoD. Leveraging existing terminals and infrastructure, these UAV systems can immediately benefit from data rates up to four times greater than those achieved on traditional widebeam satellites. A software-only upgrade to existing infrastructure can unlock even more performance gains. Conversely, replacing the existing antenna onboard a single AISR platform can cost in excess of US$1M.

Second, there is an important financial liability that comes with Ka-band SATCOM and the touted interoperability with a dedicated government system like WGS. Since WGS operates in the military portion of the Ka spectrum, this is the only band of frequencies where compatibility can be claimed. Yes, it is possible for a user with the budget to lease an entire steerable beam on a commercial platform like Inmarsat’s I-5 in order to access those military Ka-band beams; however, to use these beams at desired locations, government customers have been told they must commit to significant amounts of capacity in order to have the right to steer the beam where they need it. This can translate to purchasing many times the bandwidth actually required for the mission. This inflexible and expensive restriction ignores the limited budgets and rapidly shifting SATCOM needs of the military.

There is no such requirement for Ku-band HTS on the Intelsat EpicNG platform. Military users are free to purchase only as much bandwidth as needed making Ku-band HTS more economical to purchase.

Finally, there are critical geographies around the world that commercially supplied Military Ka-band cannot serve. Due to technical requirements on how these systems communicate with their terrestrial satellite access stations, there exist 500-kilometer “keep out” zones that affect important areas in the Indian Ocean and Pacific Ocean regions.

Claims by Ka-band HTS providers of compatibility with MILSATCOM really applies only to the military portion of the spectrum, and the impracticality of it negates any apparent advantages. The Ka-band HTS beams touted in the press and on social media, and on which commercial Ka-band services are offered, have very limited capacity per beam and cannot scale to the DOD’s increasing data rate requirements for AISR applications. Nor can they support several simultaneous missions as there is simply not enough capacity in a given beam. These service beams are no comparison to Intelsat EpicNG which, with the overlapping-spot design, provides most air-route and land locations with access to 12x the capacity.

With Intelsat’s EpicNG, existing modems on AISR platforms can be used, without the threat of the beam being moved, without the large pre-commitments, without paying for MHz not needed, and offering a multitude of options for landing user traffic, from government DoDIN teleports to commercial facilities where government terrestrial networks already exist.  If desired, SATCOM-as-a-service is also available on EpicNG with landing at various Intelsat-connected teleports around the globe. By supercharging the Ku-band space-segment with HTS on a world-wide basis,  EpicNG gives users the flexibility and control to leverage their assets and extract more from existing AISR investments.

Here’s the bottom line – Ku-band has served AISR very well for many years and today’s existing Ku-band HTS are delivering higher throughputs to and from existing operational assets.  These gains are being realized NOW via systems like Intelsat’s EpicNG, with no aero platform modifications, no investments in new hardware and with no costly retrofits.

HTS offers a quantum leap from the SATCOM of yesterday, but users need to understand the truth behind the hype when choosing the right frequency band for today and tomorrow. Intelsat EpicNG was designed to take full advantage of this next-generation in space-based communications with Ku-band SATCOM. It provides the most compelling HTS value proposition for government customers, and will play a large role in keeping the United States ahead of all potential adversaries in space.