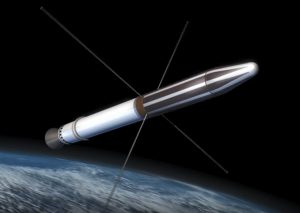 Sixty years ago, the United States successfully launched the nation’s first satellite into space. The satellite, Explorer 1, was tiny by today’s standards: 80 inches long, a bit over 6 inches in diameter, and weighing just under 31 pounds. But unlike the USSR’s Sputnik satellite launched a few months earlier, which simply demonstrated the feasibility of getting a satellite to orbit the earth, Explorer I carried scientific instruments designed to measure the atmosphere around the earth. The launch of Explorer on January 31,1958, from Cape Canaveral in Florida thus set the path we are still on today of taking technology into space to learn more about the space that surrounds us as well as about the earth itself.

Explorer 1 carried a Geiger counter to measure radiation, as well as temperature sensors and instruments to detect cosmic dust impacts. “Explorer 1 data proved that Earth is surrounded by a magnetic field that protects the planet from deadly cosmic rays,” writes Irene Klotz for Aviation Week & Space Technology. “It also discovered what came to be called the Van Allen Radiation Belts, which are zones of highly energized, charged particles, mostly coming from the solar wind, that are trapped and held in place by Earth’s magnetic field.”

From that beginning was born the space industry. Compare that to today, where there are approximately 1,400 operational satellites in orbit. And these are about to be joined by hundreds, perhaps thousands of satellites that are currently under construction or planned. In addition to operating satellites, the Air Force has catalogued 18,000 to 22,000 pieces of space debris left in orbit following the breakup of spacecraft or launch rockets.

Technology is now being used to monitor and combat this rising congestion in space. Intelsat is one of a number of organizations that has called on the Federal Aviation Administration’s (FAA) Office of Commercial Space Transportation to take on a greater role in on-orbit spaceflight safety and space situational awareness (SSA). We have several recommendations for the FAA, including smart regulation to support spaceflight safety and reliance on commercial space capabilities to solve current spaceflight safety and SSA needs.

Myland Pride, Director of Government and Legislative Affairs for Intelsat General Corp., writes, “The growing data collection, exploitation and dissemination requirements far outpace the ability of cumbersome government acquisition processes to keep up. The commercial capabilities in this area are revolutionary, and several companies have offerings that would solve many of today’s issues and anticipate those of tomorrow. Luckily, the U.S. government leadership is aware of these capabilities and seeks to take advantage of them.”

Over the years since Explorer 1, satellites have become much larger and carried more powerful payloads, deployed for such varied missions as communications, earth imaging, distant space observation, weather forecasting and navigation. Just in the past few years, commercial operators such as Intelsat have launched high-throughput satellites (HTS) that provide increases in throughput two to six times the bandwidth equivalent of earlier wideband spacecraft. This additional throughput is critical as military and government organizations rely on satellite connectivity for data-intensive applications and other uses, such as combat search-and-rescue via rotary platforms and scientific research conducted via unmanned aircraft systems.

The innovation will continue with the introduction of integrated GEO/LEO services, as demonstrated by the collaboration between OneWeb and Intelsat. The GEO/LEO services will provide an unprecedented level of coverage, enabling government customers to have fixed and mobile communications anywhere around the globe.

We look forward to continue supporting our government and commercial customers as the pace of innovation progresses.