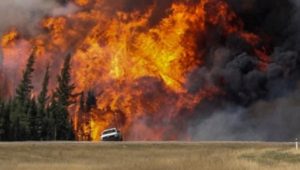 Television news and the Internet delivered thousands of images earlier this month of the gigantic firestorm that ravaged the Canadian province of Alberta. The entire population of Ft. McMurray, over 80,000 people, were evacuated as the fire bore down on their city.

Over 1,000 firefighters fought the fire around the clock, supported by more than 100 helicopters and air tankers. Rescue teams airlifted residents cut off by the flames to safety. Thankfully there were no deaths as the result of the fire itself, though there were some traffic accidents during the evacuation.

Satellite imagery played an important role in monitoring this natural disaster. Thermal bands indicated where the fire was most intense, and the imagery provided first responders with critical intelligence regarding the movement and direction of the firestorm.

In addition to satellite imagery, the firefighters on the ground were able to utilize the provinicial emergency communications system known as Firenet. This system comprised of more than 90 sites uses a wide array of communications technologies to link the firefighters to the local fire command centers as well as the provinicial command center. Intelsat General provides Ku-band satellite capacity to the province as part of a five-year award; the satellite links the remote sites back to major nodes on the network, providing the responders in the field real time two way communications

Whether it is a hurricane, earthquake, or fire such as the one at Ft. McMurray, satellites are the communications medium that can be counted on by emergency responders. Satellites can provide a full range of communications services, including voice, video and broadband data. These satellites operate with ground equipment ranging from very large fixed gateway antennas down to mobile terminals the size of cellular phones. And satellite infrastructure can be used for a range of tasks during the follow-on disaster recovery effort.

Before disasters strike, satellite networks are used in many countries to provide seismic and flood-sensing data to government agencies to enable early warning of an impending situation. Also, they broadcast disaster-warning notices and facilitate general communication and information flow between government agencies, relief organizations and the public.

With new high-throughput satellite (HTS) platforms becoming operational, satellite communications can be an even more effective emergency response and disaster recovery tool.  Next-generation technology such as Intelsat’s EpicNG HTS platform provides dramatically greater performance to emergency responders, allowing them to use smaller antennas than in the past. EpicNG enables throughput in the range of 25-60 Gbps per satellite, about 10 times that of traditional satellites and triple that of next-generation Ka-band solutions.

This allows relief personnel to use smaller antennas than in the past, and to transmit high-bandwidth media such as video while mobile. Intelsat EpicNG also makes satellite an even more effective component of Continuity of Operations (COOP) planning. COOP requires a communications infrastructure that is in place before any kind of disaster strikes. Satellite equipment could be installed at a specific location, or it could be a trailer-mounted terminal ready to be deployed to an affected location as needed.

There is no such thing as 100 percent protection against natural disasters like the Ft. McMurray firestorm. But once disasters strike, satellite connectivity plays a critical role in the immediate response and the recovery process. With recent advances like HTS, that role will only become more vital going forward.