Next-generation high-throughput satellite (HTS) systems are right around the corner, and will provide huge performance benefits for airborne intelligence, surveillance and reconnaissance (AISR) DoD missions. That was the focus of a recent SIGNAL article that highlighted how significant the improvements will be.

“Intelsat General, a leading provider of satellite services, recently completed a series of tests on its revolutionary Intelsat EpicNG satellites, committing to launch seven over the next several years. The first in the series, Intelsat 29e, is scheduled for liftoff in the first quarter of 2016 and features spot-beam technology.

‘It will not only outperform existing Ku-band satellites for these AISR missions, but will also transmit more information with equal or less satellite bandwidth than the U.S. government’s own Wideband Global SATCOM (WGS) Ka-band satellites,’ says Chris Hudson, a senior solutions architect engineer at Intelsat General. ‘An EpicNG-class satellite is starting to open up the realm of possibilities that you can have a small enough satellite terminal that would fit on smaller systems,’ such as unmanned aerial vehicles (UAVs), upon which the U.S. military relies heavily.”

Currently the 18-inch satellite antennas used for AISR can transmit about one megabit per second of data. With EpicNG, the same antennas will be able to transmit four, five or even six megabits per second through the same size satellite “pipe,” which translates into bandwidth savings for the customer.

SatCom Frontier wrote back in March about some of the reasons for the accelerating need for AISR bandwidth. Technological advancements and new strategic priorities – such as an increased reliance on special-forces operations – are driving AISR bandwidth requirements. The graph below (courtesy of Northern Sky Research) shows how quickly the demand is escalating. 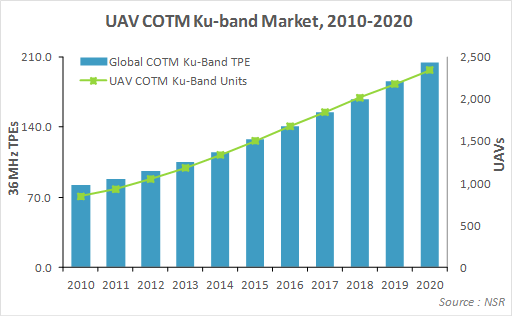 Hudson also talked with SIGNAL about the improved spot beam technology, developing what Hudson calls “steerable” spot beams that can evade jamming efforts incorporating protected tactical waveform (PTW). The first EpicNG will be launched in early 2016 and be positioned over the Atlantic Ocean. The second is scheduled for later in 2016 and will be over the Indian Ocean, well-placed to support the DoD’s increased focus on the Asia Pacific region.

For more detailed information on the dramatic enhancements EpicNG will bring to AISR, you can download a white paper by Chris Hudson.

The nature of conflict today is evolving away from “boots on the ground” towards “eyes in the sky.” HTS systems like EpicNG will ensure that the DoD continues to maintain its AISR superiority in the coming years.