It’s been an exciting few months for watching live coverage of significant global events. People around the world have enjoyed viewing the Tour de France, 2018 World Cup in Moscow, the historic Singapore Summit and the Royal Wedding in Windsor. The breadth and depth of Intelsat’s satellite solutions were front and center, ensuring that millions of people around the world could reliably view these events as the action unfolded.

The cyclists navigated the torturous, 3,351 km route throughout southern France while excited fans followed every lap via live satellite coverage. For the third consecutive year, Intelsat 905 provided 24/7 video contribution to the U.S. rights holder for coverage of the Tour de France, enabling American cycling fans to watch the action live. Satellite trucks uplinked to Intelsat 905 from the race course and downlinked to the Intelsat Teleport in Fucchstadt. The signal was then transported over the IntelsatOne network to the U.S. for broadcast. For fans who couldn’t get enough of the annual race, Intelsat was proud to give them a virtual, real-time seat next to all the action.

Throughout June and July, millions of fans rooted for their favorite teams while watching live coverage of the 2018 World Cup via Intelsat’s powerful video neighborhoods.

World Cup fans in Brazil enjoyed the most immersive experience via live, 8K transmission of multiple games thanks to Intelsat 14 and TV Globo. The stunning, highest-resolution 8K content made fans feel as if they were in the stadium, running alongside their favorite players.

Beyond the exciting 8K transmission, customers such as Televisa and DirectTV leveraged the power, reach and reliability of four Intelsat satellites to show fans every exciting moment of the game. Several customers used multiple satellites to handle their coverage needs.

Televisa relied on Galaxy 11 located at 45° East to backhaul matches over Ku-band from the World Cup venues to the International Broadcast Center (IBC) in Moscow for production. The signal was then uplinked on C-band to Intelsat 906 located at 64° East and downlinked to the Intelsat teleport in Fuchsstadt, where it was carried on IntelsatOne fiber to Televisa’s edge node in Mexico for broadcast to millions of Mexican soccer fans.

Intelsat 14 and Intelsat 34 C-band were also used to distribute the games to broadcasters throughout Latin America and Europe.

These satellites offered optimal coverage and power to meet the diverse requirements of media customers from around the world who covered this event. In total, Intelsat transmitted all 64 matches and hundreds of hours of pre and post-game footage during the World Cup.

As the world waited for the outcome of the Singapore Summit, a leading U.S. broadcaster relied on Intelsat to help them distribute fast, high quality and reliable live feeds to affiliates around the world. Intelsat 33e, the second of Intelsat’s high-throughput satellites, delivers higher performance, improved availability and expanded coverage for media customers and their reporters on the ground. The powerful spot beams of Intelsat 33e deliver greater throughput to smaller antennas, providing maximum quality and flexibility to reporters as they captured the historic event for Americans at home and abroad.

As previously shared, Intelsat enabled Canadian broadcasters to provide coverage of Prince Harry and Meghan Markle’s beautiful Royal Wedding. Many other broadcasters faced significant challenges with quality and reliable bandwidth to transmit coverage to their affiliates around the world. Cellular networks in Windsor were highly contended and congested due to the many competing broadcasters and the tens of thousands of spectators live-streaming video on their phones. However, Intelsat’s partnership with Dejero enabled Canadian viewers to watch without interruption. That was largely due to CellSat, a blended network that leverages the strength of both cellular and satellite technologies.

Despite the contention, CellSat maintained a consistent bit rate of 6-8 Mbps of throughput enabling two Canadian Broadcasters to flawlessly deliver street interviews and other local color surrounding the wedding in high definition.

Around the world events are happening that people want to see. Intelsat is partnering with broadcasters to provide reliable and cost-effective satellite solutions for contribution, distribution, and occasional use. Whatever events happen in the next month, Intelsat will be there, helping broadcasters tell the story and share the latest news, sports events and entertainment with their viewers. 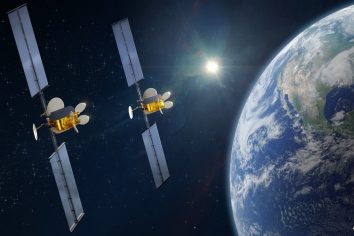