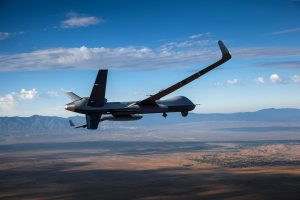 As unmanned aircraft systems (UAS) are used more widely for military and civil missions, the UAS communications infrastructure must keep up with the technological advances in the satellite industry to ensure the highest performance possible.

Unlike conventional satellites, which use a single wide beam to cover geographic areas thousands of miles wide, Intelsat’s EpicNG platform uses multiple spot beams, each covering approximately a 700-mile radius. This multiple spot beam design is inherent in high-throughput satellites (HTS) and allows for the use of much smaller ground antennas. The HTS technology also delivers higher performance from existing antennas, and enhances security on the satellite compared to traditional wide-beam designs.

“Users aren’t required to go back to one particular spot beam—a gateway,” Intelsat General Corp. President Skot Butler explained to UAS Magazine. “They can actually connect from any one of those spot beams to any other spot beam. They have the flexibility to go from anywhere to anywhere.”

Butler also spoke to Space News about the beam-switching tests. Signals in spot beams are more difficult to jam and interference can be worked around more easily, Butler said. Whether it’s intentional jamming or accidental interference, he noted, the satellite’s digital payload can disconnect the uplink from the downlink and assign new frequencies and a new link to the UAV to reestablish the connection.

In order to benefit from the anti-interference capabilities and improved security of HTS, military and civilian organizations need assurance that UAS can switch beams seamlessly while in flight without losing contact. To that end, Intelsat General joined up with GA-ASI to test the beam switching capabilities of a Block 5 Predator B/MQ-9 communicating with the Intelsat 29e satellite.

“We’d been endeavoring for quite some time to get an opportunity to demonstrate the capability of the unmanned aircraft to switch between beams on one of the new Intelsat EpicNG satellites,” Butler told Space News.

Military and Defense Department personnel observed the tests, which were performed out of GA-ASI’s flight test facility adjacent to the Grand Forks Air Force Base in North Dakota. The UAS flew 1,075 nautical miles round trip to enable it to switch between two spot beams on the Intelsat 29e satellite. “We made sure it would fly far enough that it would have to switch beams multiple times,” Butler said.

Command-and-control of the UAS as well as sensor data transmissions from the aircraft were successfully switched between the two beams. The results, verified by General Atomics, demonstrate a path forward for deployed Reaper and Predator UAS to fly confidently on Intelsat EpicNG and realize the additional benefits of higher throughput capabilities.

“This higher power essentially allows for smaller antennas or, for existing antenna, allows for higher throughput in terms of data speeds, both to and from the antenna,” Butler told UAS Magazine. “We’re talking multiples of throughput compared to what could be done before.”

The Intelsat EpicNG network can provide government and military users between 200 and 300 percent more throughput than existing wideband satellites, which comprise the U.S. government’s own Wideband Global SATCOM (WGS) constellation.

There are currently five Intelsat EpicNG satellites in orbit, four of which are currently in service. IS-37e was launched in October, and is scheduled to complete testing and enter service in early 2018. We’re excited to see what new UAS use cases are enabled as a result of these now proven beam switching capabilities.