Nelson Mandela once said, “Our children are the rock on which our future will be built.” There has probably been no greater influence on the youth of today than the advancement of digital and communications technologies. As UNICEF points out in its The State of the World’s Children 2017 report, childhood itself is becoming increasingly changed and shaped by digital technology.

But today, only 71 percent of those between the ages 15 to 24 are connected worldwide. What about the other 29 percent who cannot reap the multiple benefits of connectivity? These benefits would provide these young adults with the access to information needed to learn, gain a higher education and receive training to develop important skills needed to enter the workforce or become successful entrepreneurs.

To put this immense connectivity gap into perspective, it’s larger than the entire population of the United States. And what’s even more grave, of those 29 percent, approximately 60 percent reside in Africa.

That is why Intelsat is committed to investing in and advancing the adoption of mobile connectivity throughout the world. As a global corporation, it’s imperative we do our part to help close the digital divide.  This is so desperately needed. For us, it’s more than just good business, it’s the right thing to do as a good global citizen.

To that end, last fall we entered into a partnership with Africa Mobile Networks (AMN) — an integrator of mobile network infrastructure — to bring mobile connectivity to unserved communities in sub-Saharan Africa. This is one of the most difficult and challenging regions of the world to connect due to  its geographic complexities and the challenges associated with providing affordable connectivity to the more remote areas of the region.

Intelsat has never shied away from a challenge. Through our partnership with AMN, we found a way to overcome these obstacles. AMN has developed a low-cost solution, powered by a highly reliable small-cell solar-based system that can be rapidly deployed in less than six hours. AMN has combined its solution with the power, performance, and efficiencies of Intelsat’s three high-throughput, Intelsat Epic satellites along with our 23 other satellites that cover the African continent. The result is a mobile network infrastructure that is a fast, cost-effective, reliable solution that can help mobile network operators (MNOs) easily scale to meet evolving connectivity demands.

We’re thrilled to announce the first milestone has already been exceeded:  approximately 525 remote sites have been connected in sub-Saharan Africa, with plans to continue expanding mobile coverage to other parts of the region by the end of the year.

Today, Intelsat is enabling mobile operators around the world to provide 2G, 3G, and 4G connectivity to people and communities many thought were impossible to connect. We are demonstrating what can truly be achieved through smart, innovative solutions, which has been the basis of our success since we were first founded in 1965. As we look toward the future, Intelsat is envisioning what’s possible: a world where youth everywhere are empowered to build a brighter future, one where connectivity represents the norm, not the exception. 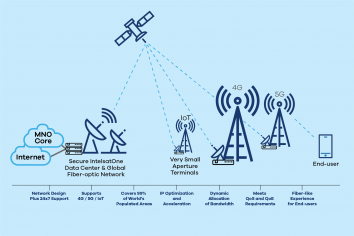