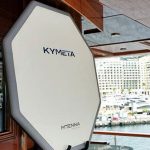 Advances in flat-panel antenna technology combined with high-throughput satellites (HTS) are opening up new mobility applications for government users. As we wrote in an earlier blog, the design makes satellite communications a viable option for new airborne, maritime, and ground-mobile applications.  Recognizing the advantages of small, flat panel antennas, Intelsat has invested in Kymeta Corp. and the company’s meta-materials-based antenna which uses flat-panel, phased-array technology.

“Our partnership with Kymeta is really to support services requiring low-profile antennas that are critical for both the commercial and government customers for satellite mobility applications,” Mohammed Marashi, Intelsat’s vice president of innovation for commercial services, said in an interview with Signal magazine.

Engineers sent data from the small airborne antenna to the Mountainside teleport via the Intelsat 29e satellite at a rate of 3.9 Mbps with an efficiency of 0.26 bits/Hz, occupying only 15.2 MHz of bandwidth. This was twice the data rate and almost three times more efficient than traditional wide-beam satellites.

Throughput improvements have also been demonstrated on Class III UAVs, which are used for tactical ISR. In the past, the small antennas on these devices limited the amount of data they could transmit. Intelsat EpicNG combined with flat-panel antennas increases throughput up to five times that of traditional satellites, expanding possible applications for these small UAVs.

Higher-throughput isn’t the only benefit achieved from combining small antennas with HTS.  Intelsat General’s Chris Hudson said in the Signal article: “With these higher-performing satellites, your existing antennas can either transmit much more data, or they can transmit the same amount of data using much less bandwidth. So it’s cost-effective and gets even more cost-effective.”

Together, small antennas and HTS create a win-win for government customers as they consider new applications that require smaller antennas and higher throughput to accomplish the mission.