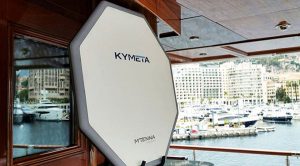 A seemingly simple change – like the size and shape of something – can have a significant impact on how powerful it is and where it can be used. Such is the case for satellite antennas, which have undergone a transformation that will make high-throughput satellite (HTS) capacity a viable option for a wide range of new commercial and military use cases.

According to National Defense Magazine:

“A pair of startups are poised to introduce radically new satellite antennas that have the potential to alter the look of military air, land and sea platforms. Electronically steered flat panel antennas are intended to replace the round, parabolic receivers/transceivers that jut up from ships, command-and-control vehicles and aircraft.”

By changing the size and shape of satellite antennas, startups such as Kymeta Corp. are making the capacity and performance promises of HTS a reality for more military and commercial organizations. HTS platforms like Intelsat’s EpicNG can support higher throughputs than previously possible. However, in order to take advantage of HTS, customers must use antennas with a larger radius. For some customers, this simply isn’t an option due to size, weight, and power restrictions dictated by their use cases. Flat-panel antennas, however, can dramatically change the equation.

More from the article:

“Krishnan Haridasan, senior manager of new solutions and services at Intelsat General Corporation, said flat panel antennas also have some advantages for non-mobile communication systems. When used by special operators, the intelligence community or others who need satellite connections in austere environments, parabolic antennas take a long time to set up, must be carried in multiple cases and require some technological skill on the part of the user.”

In order to open new markets and enable existing customers to increase their throughput, Intelsat has invested in emerging antenna technologies. These investments will help make satellite broadband connectivity available where it wasn’t possible before.

For example, parabolic antennas on aircraft are subject to bird-strikes and aerodynamics. A flat panel antenna eliminates these challenges. Other potential applications include austere conditions where users such as first responders or the intelligence community must quickly and easily install a satellite antenna. Flat panel antennas are easier to set up, more portable, and more robust due to the lack of moving parts, compared to parabolic antennas.

David Kervin, general manager and vice president of Kymeta Government Solutions, talked about the specific markets that could be opened up by smaller, more powerful antenna technology:

“Kymeta is in a partnership with Toyota, which wants to beam software updates to cars, data back up to communications satellites, and deliver entertainment options not possible with terrestrial networks, Kervin said. Along with consumer vehicles, other targeted markets are train companies, the maritime industry and commercial trucking companies. All the ‘centers of gravity’ in the military that need satellite communications are also potential customers, he said.”

With the availability of flat panel antennas, organizations have one less obstacle to overcome in their move to HTS connectivity. Often, deploying these technologies as a managed service can make the transition easier. For those that have dynamic requirements due to surges in demand or shifts in geographic coverage, a managed service like IntelsatOne Flex provides the flexibility in when and where organizations deploy. IntelsatOne Flex helps streamline capacity management while providing organizations with the flexibility they need across a region.

Just as the development of HTS will pave the way for military and commercial organizations to achieve higher-throughput, the development of flat panel antennas is yet another example of the commercial sector innovating and advancing technology for a wider breadth of use cases. When those two new technologies are combined with managed service offerings, organizations can benefit from better performance delivered with an unprecedented level of flexibility.