Army Adds Space, Cyberspace to Domains It Considers Part of Its Mission 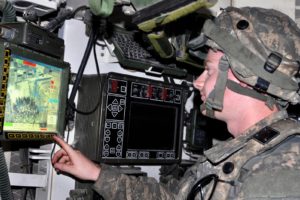 Once upon a time the Army’s mission revolved around seizing a physical spot on a map. But today that task has broadened because the map has been turned into a globe by Information Technology. An Army that faces ISIS isn’t just combating fighters holed up in a Middle Eastern city. It must contend with a sophisticated social media apparatus that broadcasts propaganda in new and innovative ways to recruit soldiers and terrorize the opposition.

Today’s Army must think of multiple domains that didn’t exist during previous conflicts, such as cyber, space and the electromagnetic spectrum. Gen. David Perkins spoke on this topic at the Association of the United States Army (AUSA) Conference in Washington, as reported in this October 4 article in C4ISRNET.

Perkins heads the Army Training and Doctrine Command, which is crafting ways of operating in today’s multi-domain warfare environment.

The Army’s primary space concerns are no longer limited to the need for satellites to relay communications to and from the field, a capability largely handled by industry in Iraq and Afghanistan. Today’s cyber can be both an Army tool and an enemy weapon. The Army might be able to use cyber tools to take enemy anti-aircraft weapons offline, just an an enemy might try to jam satellite signals or hack into a network. The Army has its own Cyber Command – the only one among the services – to cope with both offensive and defensive operations.

At the Space and Mission Defense Symposium in August, the Army made its pitch for a greater role in DoD space operations. The move is a follow-on to a June policy change in which the Army seeks to contribute to the DoD’s space capabilities and not just use those provided by other branches or commercial companies. The Army is often referred to as the largest user of those systems, as in this article in Space News on August 16.

The service is already building tools in anticipation of satellite disruption in geostationary orbit. An example is the mounted Positioning, Navigating and Timing (PNT) device, which would allow operations to continue despite degradation of the Geospatial Positioning System (GPS), whose satellites would figure to be prime targets. A chip-scale atomic clock is at the PNT core.

The mounted PNT is just one example of how the Army is changing its approach to a threat-based environment, and how it is stepping up efforts to remove limits on its role in warfare. Threats evolve. They change definition, source and direction, and the means to combat threats require system agility. The best way to achieve agility is through open architecture systems.

“Historically, you put something in the field and it has a single-point solution,” said Jeff Palombo, Mission Systems sector vice president for Northrup Grumman, in an October 6 C4ISRNET article on the AUSA Conference. “No matter how complex that system is, it’s fielded to do one thing. And what we’ve seen over a period of time is that the technology now has to be multi-spectral and multi-mission.”

The Warfighter Information Network-Tactical (WIN-T) is an example. The network is designed to handle an array of systems – legacy and those in the future — in the communications realm. Intelsat General Corp. recently entered an agreement to provide satellite capacity to RiteNet Corp to support WIN-T testing at Fort Bliss, Texas, and White Sands Missile Range in New Mexico.

Adding capabilities driven by new thinking about multi-domain warfare is not always easy.

“The challenge for us is that it’s not about the technologies; it’s the ability to integrate. It’s the ability to craft tactics, techniques and procedures, the organization of constructs by which you can do this,” said Lt. Gen. Edward Cardon, who heads Army Cyber Command (ARCYBER), in a C4ISRNET article, also on October 4. “There are a number of policy issues that have to be worked through on this as well. The technology is there; it’s how you best incorporate it.”

These multi-domain threats are constantly evolving. So too must the Army evolve, and continually develop new capabilities in response.