Dulles, Virginia and Luxembourg 12 April 2016 – Orbital ATK, Inc. (NYSE: OA), a global leader in aerospace and defense technologies, today announced that Intelsat, S.A. (NYSE: I), operator of the world’s first Globalized Network, has signed a contract to become the first customer for Orbital ATK’s new satellite life extension service. As one of the world’s leading commercial satellite services providers, Intelsat has a long track record for incorporating innovative satellite technologies into its global operations. Under the agreement, Orbital ATK will manufacture, test and launch the first Commercial Servicing Vehicle (CSV), the Mission Extension Vehicle-1 (MEV-1), which incorporates flight-proven technologies the company has used in its commercial satellite and space logistics businesses. After successfully completing a series of in-orbit tests, the MEV-1 will begin its mission extension service for Intelsat in 2019.

“We are delighted to partner with Intelsat to introduce this innovative new service to the commercial satellite market,” said David W. Thompson, Orbital ATK’s President and Chief Executive Officer. “The MEV-1 demonstrates the combined capabilities of Orbital ATK following the merger of our two legacy companies last year. The MEV-1 benefits from the capabilities in space logistics that both companies had developed. This new service is synergy at its best and presents an opportunity for Orbital ATK to open a new market in commercial space.”

Mr. Thompson continued, adding, “There is a vital need to service fully functional but ageing satellites in both commercial and government markets. Backed by our continued investment, today’s announcement signals that we are just getting started in expanding our CSV fleet to provide a diverse array of in-space services in the future.”

“Given the size of our satellite fleet, any technology that enhances our in-orbit flexibility allows us to be more responsive to our customers, such as extending the life of a healthy satellite so that it can be deployed for a late-breaking opportunity at another orbital location or maintaining service continuity before the arrival of new technology.

We have actively supported in-orbit servicing from its inception, and are proud to pioneer with Orbital ATK on this game-changing innovation,” said Stephen Spengler, Chief Executive of Intelsat.

“Orbital ATK is an established satellite manufacturer with the platform as well as the system and operational expertise to make this happen. We will break new ground together with this space rendezvous at 22,000 miles above the earth and I am already looking forward to the in-orbit servicing possibilities that future robotic technologies will enable,” Mr. Spengler concluded.

Orbital ATK will introduce in-orbit satellite servicing with the Mission Extension Vehicle-1 which is based on the company’s GEOStar spacecraft bus platform. Controlled by the company’s satellite operations team, the MEV-1 uses a reliable, low-risk docking system that attaches to existing features on a customer’s satellite. The MEV-1 provides life-extending services by taking over the propulsion and attitude control functions. The vehicle has a 15-year design life with the ability to perform numerous dockings and undockings during its life span.

The launch of the first MEV is slated for late 2018 with in-orbit testing and demonstration to be performed with an Intelsat satellite. This testing is scheduled for completion by early 2019. MEV-1 will then relocate to the Intelsat satellite scheduled for the mission extension service, which is planned for a five-year period. Intelsat will also have the option to service multiple satellites using the same MEV.

“With this first contract for satellite life extension we are creating a new and very real market for space logistics,” said Frank Culbertson, President of Orbital ATK’s Space Systems Group.

“Orbital ATK is already a leader in the emerging space logistics market through our commercial cargo delivery to the International Space Station, our participation in NASA’s Tipping Point program and our work in designing a bus for the asteroid robotic retrieval mission. The contract with Intelsat builds on our leadership position and we are ready to introduce even more space logistics capabilities and services for commercial and government customers alike.”

Orbital ATK’s vision is to establish a fleet of servicing vehicles that can address the diverse servicing needs of GEO satellites as well as perform other services such as repair and assembly. In addition to its commercial mission extension services, the company is working closely with U.S. government agencies to develop additional space logistics technologies, such as robotics and high-power, solar-electric propulsion.

Orbital ATK is a global leader in aerospace and defense technologies. The company designs, builds and delivers space, defense and aviation systems for customers around the world, both as a prime contractor and merchant supplier. Its main products include launch vehicles and related propulsion systems; missile products, subsystems and defense electronics; precision weapons, armament systems and ammunition; satellites and associated space components and services; and advanced aerospace structures. Headquartered in Dulles, Virginia, Orbital ATK employs approximately 12,000 people in 18 states across the U.S. and in several international locations. For more information, visit www.orbitalatk.com.

Intelsat S.A. (NYSE: I) operates the world’s first Globalized Network, delivering high-quality, cost-effective video and broadband services anywhere in the world. Intelsat’s Globalized Network combines the world’s largest satellite backbone with terrestrial infrastructure, managed services and an open, interoperable architecture to enable customers to drive revenue and reach through a new generation of network services. Thousands of organizations serving billions of people worldwide rely on Intelsat to provide ubiquitous broadband connectivity, multi-format video broadcasting, secure satellite communications and seamless mobility services. The end result is an entirely new world, one that allows us to envision the impossible, connect without boundaries and transform the ways in which we live. For more information, visit www.intelsat.com.

Intelsat Safe Harbor
Statements in this news release constitute “forward-looking statements” that do not directly or exclusively relate to historical facts. When used in this release, the words “may,” “will,” “might,” “should,” “expect,” “plan,” “anticipate,” “project,” “believe,” “estimate,” “predict,” “intend,” “potential,” “outlook,” and “continue,” and the negative of these terms, and other similar expressions are intended to identify forward-looking statements and information.

The forward-looking statements reflect Intelsat’s intentions, plans, expectations, assumptions and beliefs about future events and are subject to risks, uncertainties and other factors, many of which are outside of Intelsat’s control. Important factors that could cause actual results to differ materially from the expectations expressed or implied in the forward-looking statements include known and unknown risks. Known risks include, among others, the risks described in Intelsat’s annual report on Form 20-F for the year ended December 31, 2015, and its other filings with the U.S. Securities and Exchange Commission. 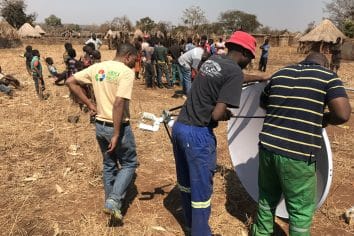 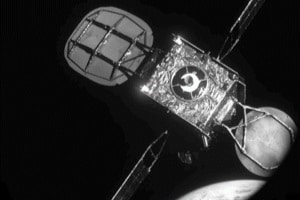 MEV-1: A Look Back at Intelsat’s Groundbreaking Journey April 17, 2020