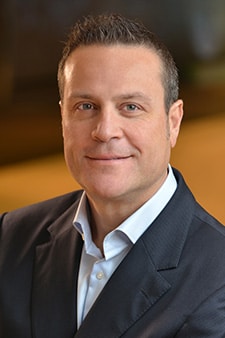 Samer Halawi is the Executive Vice President and Chief Commercial Officer for Intelsat, where he is responsible for leading the company’s global commercial operations, including the broadband, mobility, media, and government businesses, as well as the sales and marketing teams. He brings tremendous experience and expertise with more than 20 years in business development, telecommunications, and global satellite communications.

Prior to joining Intelsat, Mr. Halawi served as the Chief Commercial Officer for OneWeb, where he established and oversaw the distribution, product management, communications, business development, strategy, and sales and marketing functions for the company.

Before that, Mr. Halawi held a six-year position as the Chief Executive Officer for Thuraya Telecommunications Company, where he led a turnaround in Thuraya’s performance and positioning, and drove its growth to become a prominent international mobile satellite operator.

Mr. Halawi spent eight years at Inmarsat in global strategy and running operations for the Middle East, Africa, and Asia Pacific. His telecommunications experience includes roles at Flag Telecom and ICO Global Communications (ICO). His role at ICO followed a private placement for the shares of the company that he led during a three-year period in investment banking in the Middle East. Mr. Halawi began his career in the automotive industry, where he occupied several positions with Chrysler Corporation and Ford Motor Company.

He holds a Bachelor of Science degree in electrical engineering from Lawrence Technological University and an MBA from the University of Michigan at Ann Arbor in the U.S.